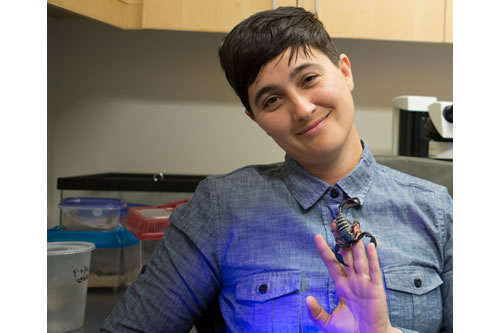 I had the pleasure of meeting Dr. Lauren Esposito a few weeks ago on Zoom. Lauren is the curator and Schlinger Chair of Arachnology at the California Academy of Sciences and the Distinguished Speaker for the Science & Technology Division at ATA63. Keep reading for highlights of our conversation.

MM: Lauren, we are very excited to have you as our division’s Distinguished Speaker at ATA63. You are the curator of arachnology at the California Academy of Sciences. Could you tell us a little bit about yourself and your work?

LE: Yes, absolutely. I actually wear several different hats. My primary hat at the Academy of Sciences involves understanding and interpreting the different species of arachnids—like spiders and scorpions—that live on Earth today, as well as the past processes on Earth that have led to the diversity we see today. I study things like global change, geology, the formation of islands, forests and deserts, as well as the effects these have on how species form on Earth.

I run a research lab where I work with students and postdoctoral researchers, all of whom are concerned with various parts of the “Tree of Life” as it pertains to arachnids. We have many different projects going on in all sorts of different directions but all related to that central topic.

In addition, I oversee and manage our research collection of specimens at the California Academy of Sciences. We have about 46 million objects in our collection and specimens dating back to the mid-1800s, in some cases even earlier. As a large natural history museum, we have inherited orphaned collections from other abandoned museums or universities over the years, and we even have specimens that were collected by Charles Darwin and Alfred Russel Wallace. It is really a very exciting collection and one of the largest in the world.

I am also engaged with outreach and education. The Academy is a public science museum—we have about 1 to 1.5 million visitors every year—so we get to share our research and the wonder of nature with the general public through public programs and lectures. This is a great opportunity for me to share the kind of work that I do and my love for science with a broad general audience.

I also do outreach all over the world. One of the things I am working on right now is a big institutional initiative called “Islands 2030,” which is broadly focused on halting the loss of biodiversity on tropical islands by the year 2030, in line with the UN Sustainable Development Goals. We as scientists and educators are trying to understand how we can support island communities to create a more sustainable future that safeguards not only their natural resources but also their cultural resources, which are by and large dependent on the resilience and stability of natural ecosystems.

So, while I’m focused on arachnids as a study system, I’m also interested in how we can change what’s happening on Earth—species decline, which leads to an ecosystem collapse—and what we can do as individuals, scientists and community members to halt that trajectory. That is in a nutshell what I do, but there are many other activities and organizations I’m involved in.

I read on your Wikipedia page that you are one of only a few women scorpion experts. What made you decide to study arachnids, particularly scorpions?

LE: I think it’s really a story of my childhood and my upbringing. Both of my parents are biologists: my father is a veterinarian, and my mother has a degree in wildlife science and helped in my father’s veterinary clinic. I grew up amid animals and actually learned to walk holding onto a dog at the veterinary clinic. I was born and raised in West Texas in the Chihuahuan Desert, which is a really beautiful part of the country. It is pretty sparsely populated and we could drive for hours in any direction from the city, so we spent a lot of time out in nature, like lakes, creeks and forests. Most of my time out of school I spent in the Bahamas where my grandparents lived. They lived on a tiny out island with no cars, no telephones and no televisions, so it was just me and nature. I think that those are really formative experiences for a young person. I was encouraged to look around and flip over rocks and flowerpots and pavers and to experience the smaller side of nature, mostly insects at that point. As I grew up and went to college, I decided to major in biology, mostly because that had been my favorite subject in high school. I was initially thinking of going to medical school, but while I was a pre-med major, I had two back-to-back experiences that changed my trajectory forever. The first one was an entomology class I took because I remembered collecting insects as a kid with my mom and thought that sounded like a pretty fun class to take. I ended up loving that class a lot as well as getting acquainted with just the incredible diversity of small life that’s just in a single field of grass.

I then applied for an internship that focused on invertebrate zoology—which can be things like sea anemones or jellyfish, or insects—at the American Museum of Natural History in New York City. Up until that point in my life, I had never even visited a natural history museum. I grew up in this west Texas town that was pretty isolated, and I had never been to a huge natural history museum like the Smithsonian or the American Museum of Natural History, so this was my very first experience. I not only got to experience the museum as a public visitor, but I also got to see their research collections and the wealth of information about the world and its history that we can learn from those.

I think at that point I was committed. My research project that summer actually ended up being about scorpions and when I got home, I don’t think I ever considered doing anything else. So, I applied to graduate school and worked with the same person who had been my undergraduate mentor that summer throughout my master’s and PhD studies, and here I am, 20 years later, still working with scorpions.

What inspired you to accept the invitation to present at the ATA conference?

One of the amazing things about being a biodiversity scientist is that I work all over the world. I’ve been to every single inhabited island in the Caribbean and have visited major tropical island archipelagos in every ocean of the world. This means that I am constantly interacting with people who speak a different language, so am really excited about understanding how to better communicate with the people I interact with and encounter in the world.

I certainly have a deep love and appreciation for translators and interpreters because they provide the means for me to communicate. Although I grew up speaking Spanish and I understand French and Portuguese, I do sometimes use interpreters, and certainly translators who translate the documents that I need to submit, like permit applications, visa applications or scientific research applications. I am really excited to get to know this community and to understand what the tools of the trade are in terms of facilitating communication across languages.

The title of your presentation is “Saving humankind, one scorpion at a time.” Can you tell us why you chose that title, without giving away too much?

Sure! I chose this title for two reasons. Firstly, because a balanced ecosystem is a healthy ecosystem, and organisms like scorpions play a pivotal role in balancing the ecosystem. They are the top predator of the invertebrate food chain, so they play an extensive role in keeping their prey—insects that are often phytophagous, or plant-eating—in check and those population sizes. So even something as seemingly insignificant as a scorpion is actually really critical to the ecosystem health that gives us clean water and clean air, and even acts as a buffer against things like storms.

Secondly, we increasingly use plant and animal products to directly support human health in the form of therapeutics and therapeutic medicine. Scorpions produce venom that targets the nervous system in a highly specific way. A single individual scorpion venom might have 200 unique components, each of those with its own specific targets. So, studying scorpions and scorpion venom creates a gateway into potential avenues for human therapeutics that can treat a wide range of diseases. This includes research on cures for cancer or rheumatoid arthritis and research on new forms of antibiotics or new pain blockers that are not addictive like opioids. There is a wide array of potential therapeutic uses for scorpion venom and that of other arachnids. In studying and better understanding the diversity of scorpions on Earth, we actually improve our chances of finding and developing therapeutics derived from scorpion venoms, and so it is in our best interest to preserve life on Earth.

What do you hope people will take away from your presentations?

The main thing I hope people will take away is just how critical even the tiniest life on Earth is and what role it plays in preserving our own future as humans, and  more importantly the role that we humans should play in ensuring our future by centering biodiversity in our own lives.

Lauren, thank you so much for taking time to meet with me. I am looking forward to meeting you in person at the ATA conference in October and attending your sessions.

Dr. Lauren Esposito will be presenting two back-to-back sessions at ATA63 in Los Angeles on Saturday, October 15, 8:30-9:30 am and 10-11 am. Her sessions are titled “Saving Humankind One Scorpion at a Time.” To find out more and to register for the conference, visit the ATA63 website at ata63.org.

(All photos in this article are published with permission from Lauren Esposito.)

My Poster Presentation: an Unforgettable Experience

Poster Presentations at the ATA Conference