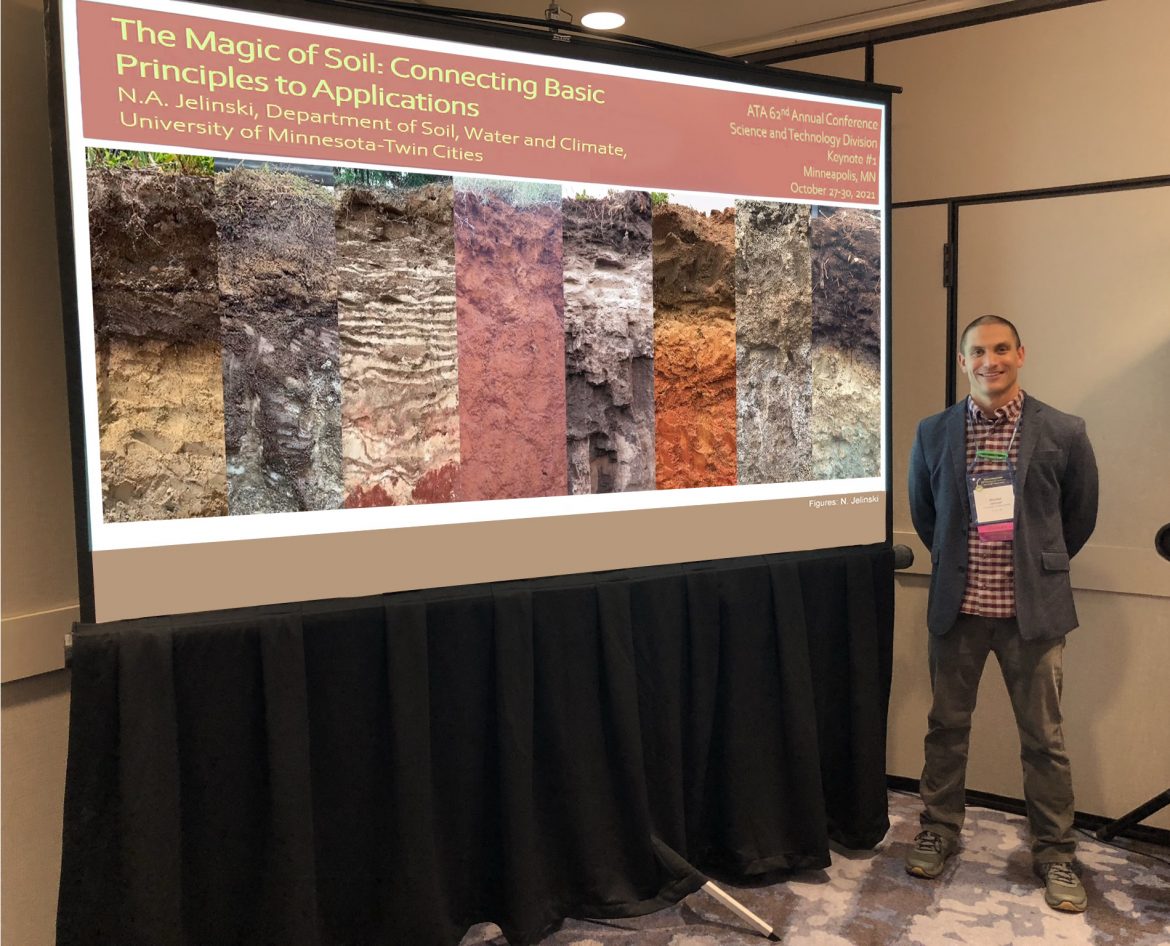 (Photo published with the speaker’s permission)

Dr. Nic Jelinski, assistant professor of soil science in the Department of Soil, Water, and Climate at the University of Minnesota, shares his enthusiasm for his research in a vibrant and colorful presentation on Saturday, October 30, at the ATA62 Conference in Minneapolis, MN.

Have you ever wondered what soil is made of and why it is important for humans and life on earth in general? We often think of soil as the dirt in our backyard or the stuff stuck to our shoes after a hike in the woods, but soils are so much more than that, as we are about to learn.

All elements in our bodies come from soil minerals (sodium, potassium, iron, etc.), organic matter (sulfur and chlorine), air (carbon and nitrogen) and water (oxygen and hydrogen). The transfer of these elements into the human body is mediated by the plants and animals we eat.

“Soils are the manifestation of star dust―the source and destination of all of us at some point in time,” says Jelinski. “We are all TNS (Temporary Not Soil), since the dry mass of our tissues comes from or is supported by soil, through plants and animals we consume.” Soils are connectors and to study soil is to study ourselves—physically, chemically and culturally.

Using bananas as an example, Jelinski explains that we all have a deep connection with soil through potassium (K). Potassium is largely contained in layered soil minerals (micas and illites) that are released through weathering. Through scanning electron microscope images, we learn that as mica weathers, the potassium gets released and taken up by plant roots.  When people consume those plants, potassium becomes part of our bodies and makes our hearts beat.

The Human-Soil Connection in Linguistics

Another interesting connection, especially for our audience of linguists, is the relationship between the Latin words humanus and humus. These words, along with derivatives like human, humanity and humility, have its origins in the Proto-Indo-European (P.I.E.) word *dʰéǵʰōm meaning earth or soil, and have entered English through Latin and French. This interconnectedness between humans and soil indicates that not only do we have a strong physical connection with soil, but also a cultural one.

Why are soils so fascinating?

One important aspect of soils is particle size. The speaker uses an interesting analogy between a teaspoon of coarse sand having a total surface area of a textbook, while the same teaspoon of clay has a surface area as large as a football field. This is not only because clay particles are tiny but also because they are shaped like thin plates. As a result of the larger surface tension, clay soils have greater pore space which matters greatly for the way water interacts with the soil and for microbes and plants that are trying to make a living in the soil.

Another fascinating characteristic of soils is that soil particles are negatively charged and therefore attract positively charged nutrients, which is why soils can hold onto nutrients and prevent them from being flushed out.

As a result, soils are more chemically reactive and biologically diverse than we can imagine. The energy from the sun ends up in the soils through photosynthesis and leaks out through plant roots as carbon into the soil, which feeds a huge array of microbial life.

So how is this important to humans?

In addition to microbes, soils also contain a range of potentially relevant molecules. Many modern medical revolutions have been dependent on soil microbes and minerals. The first discovered antibiotic, for example, was isolated from a very common group of soil bacteria called Streptomyces in 1940. Another example is kaolinite, a common soil mineral which promotes coagulation and is used in bleeding control applications.

“Soils are the factory of life,” Jelinski states. “Understanding how normal soils may have the key to future medical revolutions is really important.”

Jelinski concludes his presentation with a quote from Charles Kellogg[1]: “… all life depends upon the soil … There can be no life without soils and no soil without life; they have evolved together.”

My takeaway from this captivating session is the realization that soil is so much more than just ground we walk on―it is not just our source of food and fuel, but our source of living.

If you missed ATA62 and are interested in learning more about this fascinating topic, visit https://www.youtube.com/watch?v=dzZ6ACiXtlE to watch Dr. Nic Jelinski’s TEDxUMN.

My Poster Presentation: an Unforgettable Experience

Poster Presentations at the ATA Conference